Please email us to find out more:

I met Simon Camilleri during Ignition Creative Artists gathering back in April 2005, and was very inspired by him. The workshop that I did with Simon on Biblical Storytelling was very impactful for me personally. I am convicted that this is a powerful way of communicating the spoken Word of God.

I'm excited to let you know about the news this month for The Backyard Bard.

Do you want to be trained in Biblical Storytelling? Would you like to be involved our theatre company, The Backyard Bard? This could be the program for you. I'm pleased to announce the creation of the Backyard Bard Apprenticeship Program. This is a way for you not only to receive basic training in Biblical Storytelling but also be coached and mentored by an experienced storyteller so you have the skills and experience to continue doing storytelling for yourself.

As part of the program, we will discuss with you a number of goals and tailor a plan especially for you so that we can help you achieve them. These goals could involve things like:

To apply to be part of the program, you must first contact us to express your interest and then attend a Biblical Storytelling Crash Course which functions not only as initial training, but also as an audition.

As a management team, we are always talking about ways to help people to keep making the next step in doing Biblical Storytelling for themselves. We believe this is a fantastic initiative that will help many.

Places are limited. Please contact me today to find out more. 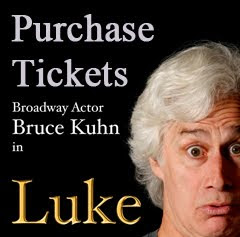 To celebreate the 400th anniversary of the King James Bible, the Bible Society of Australia are hosting a tour of storyteller Bruce Kuhn to perform the Gospel of Luke. I've been in contact with Bruce over email in the past and I can't wait to hear him. Here is some of the information from the Bible Society's website:

Bruce Kuhn's "The Gospel of Luke" is the story of Jesus, memorized word for word from the Bible and told with the passion and surprise of an eyewitness account. In a compelling ninety minutes, the words come alive with the urgency and humor of someone who was there. Alone on stage, Broadway actor Bruce Kuhn weaves the tale of the Christ without props or sets, dressed in modern, casual clothing. The show premiered at the acclaimed Actor’s Theatre of Louisville (one of America’s largest professional theaters) to rave reviews and an extended run. The text is the King James Version, which takes to the stage like Shakespeare.

Here are the dates and venues:

You can find out more details here: http://www.kjv11.com.au/p/bruce-kuhn-australian-tour.html

That's all from me. Hope to see some of you this weekend to see Bruce!